Sea Bird Cities Off Audubon’s Labrador
Thousands of seabirds, including gulls and cormorants, call the rocky, fog- shrouded cliffs of Labrador home.
A New Light Dawns on Bird Photography
New advances and techniques in photographing birds in flight and at rest are described by a professor of ornithology.
Luxembourg, Survivor of Invasions
Luxembourg survived invasion by the German occupiers and the American liberators, but the influx of tourists is almost too much for one small country.
Mapping the Nation’s Breadbasket
The central United States produces most of our nation’s grain and many other products. Tour the Midwestern states to see where all that bounty comes from, and where it goes.
Midshipmen’s Cruise
The first voyage of Naval cadets aboard the U. S. S. New Jersey consists of hard work, study, and very little free time.
Cloud Gardens in the Tetons
Hiking and camping in the Grand Tetons is not for the faint of heart, but the rewards of seeing this lofty landscape in full summer color are worth it.

Be the first to review “National Geographic June 1948” Cancel reply 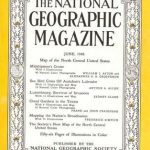