Pirate- Fighters of the South China Sea
The coast of southern China is one of the last strongholds of piracy in the 20th century. To combat the pirates, the shipowners and sailors have assembled a motley collection of weapons and vessels. Robert Cardwell boarded many of these craft in the year
Cape Cod People and Places
The narrow hook of Cape Cod stretches out into the Atlantic Ocean, luring fish and tourists to its sandy beaches. In fall, when the tourists retreat, the life of residents resumes its old- fashioned rhythms.
Your Navy as Peace Insurance
Fleet Admiral Chester W. Nimitz states the case for maintaining a strong navy in peacetime.
The Worm Turns
Wiscasset, Maine, is the home of the small but thriving live- bait industry. More than 12 million worms of different varieties were harvested in one season, bringing income and employment to hundreds of diggers, distributors, and dealers. Samuel Sandrof
Sunset in the East
Life in occupied Japan is poor and grim for many Japanese citizens. Blair A. Walliser reports on life for both conquered and conqueror, as both adjust to their post- war roles.

Be the first to review “National Geographic June 1946” Cancel reply 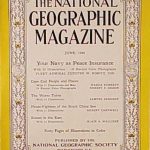