The Making of Military Maps
From a secret location outside Washington, D. C. , the Army Map Service prints about five million maps a month for military operations.
Insignia of the United States Armed Forces
The National Geographic Society President introduces several articles dedicated to the 654 different insignia worn by the armed forces of the United States, and the 337 insignia of military and naval aircraft.
Scotland in Wartime
Scotland began defending itself when the Germans attacked in 1939. Since then, the Scottish people have tirelessly defended themselves.
Lend- Lease Is a Two- way Benefit: Innovation in Creative Statesmanship Pools Resources of United Nations, and Supplies American Forces Around the World
Essentially a bartering system, Lend- Lease enables British and American troops to exchange supplies, troops, and weapons that they use to defend each other.
Aircraft Insignia, Spirit of Youth
This article illustrates and explains the 337 Army and Navy aircraft insignia.
United States Military Insignia
Worn on caps, shoulders, sleeves, lapels and collars, these insignia display rank, grade, and specialty of soldiers in the U. S. Army.
The Traditions and Glamour of Insignia
Since the Middle Ages, insignia have designated special valor, as they do in today’s military forces.
United States Navy, Marine Corps, and Coast Guard Insignia
All insignia worn by the U. S. Navy, Marine Corps, and Coast Guard are illustrated and described here.

Be the first to review “National Geographic June 1943” Cancel reply 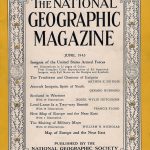