The Lincoln Memorial
U. S. Chief Justice William Howard Taft’s 1922 address upon the dedication of this elegant memorial to Lincoln, the Nation’s Savior.
The Capitol, Wonder Building of the World
The seat of the federal legislature, writes NATIONAL GEOGRAPHIC Editor Gilbert H. Grosvenor, is not only beautiful but also symbolizes the dignity and might of the nation.
The Transformation of Washington: A Glance at the History and Along the Vista of the Future of the Nation’s Capital
In 1900, the hundredth anniversary of the first implementation of Pierre L’ Enfant’s plan for a Federal District along the Potomac, a planning convention was called to further actualize his blueprint. The head of the Commission of Fine Arts describes th
The Sources of Washington’s Charm
Washington is different from all other places: abundant parks and gardens, more street trees per capita than any other American city, an incomparable natural setting, dignified public buildings, and picked men from nearly every field of human achievem; e

Be the first to review “National Geographic June 1923” Cancel reply 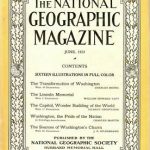