Madonnas of Many Lands
Sixteen full- page photographs explore the many faces of motherhood across the globe and the diverse ways in which mothers care for their children.
Our First Alliance
The French Ambassador to the United States explores the special relationship that has existed between France and the United States since the American Revolutionary War.
Our State Flowers: The Floral Emblems Chosen by the Commonwealths
Thus far 38 states have chosen flowers as emblems of their statehood. Color paintings of the state flowers, by Mary E. Eaton of the New York Botanical Garden, are reproduced.
Reviving a Lost Art
A timeless method of food conservation, dried foods can help to feed Allied armies and stretch precious food resources at home.
The Conversion of Old Newspapers and Candle Ends into Fuel
Tightly rolled newspapers boiled in paraffin become inexpensive ration heaters to warm soldiers in cold trenches.
Our Second Alliance
In the first address by a resident ambassador of any foreign country before the U. S. Congress, French Ambassador J. J. Jusserand expresses his nation’s gratitude to America for coming to Europe to take part in the fight for liberty.

Be the first to review “National Geographic June 1917” Cancel reply 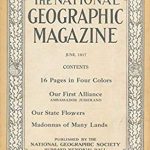