Some Tramps Across the Glaciers and Snowfields of British Columbia
A succession of one mountain range after another, the Canadian Rockies have more glaciers than the Alps. Among the finest of these glaciers – – and easily reachable by the Canadian Pacific Railroad – – are the Great Illecillewaet, the Asulkan, and the Ge
Costa Rica- -Vulcan’s Smithy
The mountains of southern Costa Rica are old and without volcanic activity, while the mountains of the northwest are newer and composed of mostly active and semi- active volcanoes. Photographs highlight these volcanoes and the destruction they’ ve caused
European Tributes to Peary
All the nations of Europe unite to give Commander Peary a royal welcome during his lecture tour of England and the Continent.
Notes on Finland
In language and political institutions, Finland is to Sweden as the U. S. is to Britain.
Where Women Vote
Finnish women have had the right to vote since October 1906. The result has been positive overall, the author says, but it is also well to remember that Finnish women have been admitted to university for more than 30 years and that they have held jobs in
The Erratic
Isolated, out- of- place boulders in the northern states of the U. S. give evidence of Ice Age glaciers more than 200, 000 years ago.
A Primitive Gyroscope in Liberia
The gyroscope may be new to steamships and toys, but the principle can be found in an old top- like amusement that is in use among the Golahs of Liberia, in West Africa.

Be the first to review “National Geographic June 1910” Cancel reply 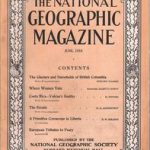