Ceylon, Island of the Lion People
Ceylon ( Sri Lanka) was the first British crown colony to attain independence and dominion status. The author visited the island shortly before independence to see how life there is changing.
Pacific Wards of Uncle Sam
The United States Trust Territory of Pacific Islands includes the Marshall, Marianas, and Caroline Islands, as well as many smaller islands and atolls. W. Robert Moore visits the newest U. S. possessions to learn more about the lives of their inhabitants
Liechtenstein Thrives on Stamps
The Principality of Liechtenstein survived World War II by maintaining a strict neutrality. In the postwar era, the tiny country’s economy booms, based on agriculture and the sales of special- issue stamps.
The Mighty Hudson
The author explores the vast historical and contemporary importance of this drowned valley, by exploring life along the Hudson’s banks.
Artists Look at Pennsylvania
For a year and a half, 14 artists studied Pennsylvania, producing 116 watercolors, oils, and sketches depicting life in all areas of the state.
Peasants of Anatolia
The lives of the peasants of Anatolia, old Asia Minor, have changed dramatically, since the advent of Turkish independence in 1923.
Spitsbergen Mines Coal Again
A photo essay shows life at the rebuilt Spitsbergen coal mines, three years after the end of World War II.

Be the first to review “National Geographic July 1948” Cancel reply 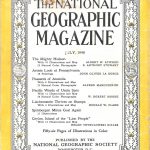