British Castles, History in Stone
Norman Wilkinson sketched some of Britain’s most famous castles, including Glamis and Windsor, to illustrate this brief history of castles and fortresses.
The World in Your Garden
There are about 25, 000 species of cultivated plants. Of these, about 10, 000 are valued for the ornamental value of their flowers. A series of illustrated essays on flowers from around the world describes their beauty.
Adventures with the Survey Navy
Few U. S. citizens were aware of the role of the U. S. Navy’s Hydrographic Office, whose survey ships charted a route to Japan through the tricky waters of the Pacific.
Drums to Dynamos on the Mohawk
The Mohawk River flows from upstate New York to the Hudson River, with historic towns and cities along its banks.

Be the first to review “National Geographic July 1947” Cancel reply 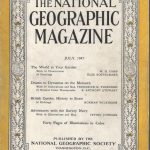