High Country of Colorado
The director of the Colorado Museum of Natural History travels through the mountains of the High Country, a sparsely populated haven for many kinds of wildlife.
Mystery Mammals of the Twilight
This article seeks to dispel many of the myths surrounding bats and provides a report on the true abilities of these misunderstood fliers.
Forest Lookout
The U. S. Forest Service hired women as fire lookouts for the first time in 1943, a result of World War II. One of these pioneering women tells her story.
Farewell to Bikini
Prior to testing the atomic bomb on Bikini Atoll in the Marshall Islands, the population is removed to an island 125 miles eastward.
Postwar Portrait of the United States
Features of the new supplement map are detailed. Demographic changes in the U. S. are also discussed.
Seals of Our Nation, States, and Territories
A history of the purpose and use of seals by governments, along with descriptions of the symbolism of the seals of the nation, it’s states, and territories, accompany the color paintings included in the article.

Be the first to review “National Geographic July 1946” Cancel reply 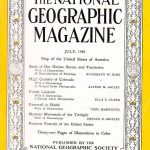