Potomac, River of Destiny
The Potomac River forms much of the border between Maryland and Virginia. Albert W. Atwood traces the course of the Potomac from its source in the remote highlands of West Virginia to the banks of Washington, D. C. , and out to the Chesapeake Bay, noting
Yank Meets Native
For many American soldiers, serving overseas provides them their first encounter with different and often remote cultures. Wanda Burnett spoke with many newly returned Yanks and recounts some of their favorite stories of cultural clash.
To Market in Guatemala
Author Luis Marden visits a traditional market in Guatemala, which has remained largely unchanged for centuries.
War’s Wake in the Rhineland
Thomas R. Henry, accompanying the United States’ First Army as it secures the area along the Rhine River, provides a firsthand description of conditions in this war- devastated part of Europe.
This Was Austria
A photo essay captures pre- war Austria, forever altered by the ravages of armed conflict.

Be the first to review “National Geographic July 1945” Cancel reply 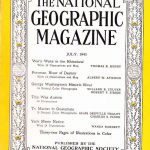