The Geographic’s New Map of Germany and Its Approaches: With a Review of The Society’s Maps of Europe
War has altered European boundaries many times in the past 30 years, but the National Geographic Society’s new, ten- color map of Germany shows the newest boundaries.
Indians of Our Western Plains
Though they spoke many different languages, all the Plains Indians from the Dakota to the Pawnee depended on buffalo for food, clothing, and shelter.
Landing Craft for Invasion
Trained men who operate the landing craft of the Amphibious Force of the U. S. Navy and Coast Guard, are vital to invasions because their ships deliver troops directly to beaches.
Britain Fights in the Fields
Rather than suffering during the war, Britain’s farmers have increased production by 70 percent above the prewar level.
Behind the Lines in Italy
While based in Italy, a corporal in the U. S. Army Air Forces becomes familiar with Italian food, farms, grapevines, and friendly people, and witnesses an eruption of Mount Vesuvius.

Be the first to review “National Geographic July 1944” Cancel reply 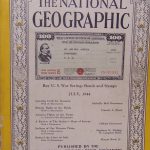