Lords of the Rockies: Photographing Big Game Animals in Their Primeval Surroundings, from Arizona to Canada, Brings Adventure to Two Wilderness Wanderers
Hunting game with a tripod and camera, photographers discover many moose, mule, deer, pronghorn, elk, and bear in the Rocky Mountains.
My Four Antarctic Expeditions: Explorations of 1933- 39 Have Stricken Vast Areas from the Realm of the Unknown
On his most recent expedition to Antarctica, polar explorer Lincoln Ellsworth claimed for the United States a piece of land as big as Nebraska.
News of the Universe: Mars Swings Nearer the Earth, Sunspots Wane, and a Giant New Telescopic Eye Soon Will Peer Into Unexplored Depths of Space
Important astronomical events occur in 1939, for instance, the planet Mars orbits closer to Earth and is observed by powerful telescopes.
The World That Rims the Narrowing Atlantic: Latest Ten- color Map Supplement Shows Four Continents and New Transatlantic Air Routes Which Make This Ocean Only One Day Wide
The latest map of the Atlantic shows the geographic features and transportation routes of this shrinking ocean – – which may now be crossed in a single day.
At Home on the Oceans: Whales and Sharks Make Exciting Neighbors for a Professor’s Wife, Turned Able Seaman, On a Three- year Voyage Around the World
An American couple builds a 37- foot boat and sails around the world, stopping in Jamaica, the Galapagos Islands, Tahiti, New Zealand, and Mauritius on their 38, 000- mile journey.

Be the first to review “National Geographic July 1939” Cancel reply 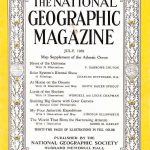