Fearful Famines of the Past: History Will Repeat Itself Unless the American People Conserve Their Resources
Americans are encouraged to use their ingenuity to preserve and conserve food so that ample supplies – – an estimated 550 million bushels of wheat in just one year alone – – can be sent overseas to our Allies.
Russia’s Man of the Hour: Alexander Kerensky’s First Speeches and Proclamations
Russia’s revolutionary leader details the aims and obstacles of Russia’s popular movement in several of his speeches, excerpted here.
Letters from the Italian Front
In letters to a friend, a nurse describes the ordeals – – and the rewards – – that international volunteers, such as herself, experience in tending the wounded in Italy’s war hospitals.
The Rat Pest- -A National Liability { The Rat Pest: The Labor of 200, 000 Men in the United States Required to Support Rats, Man’s Most Destructive and Dangerous Enemy}
The history of this sturdy, fierce, and cunning animal, its fecundity, and its amazing cost to mankind is reported.

Be the first to review “National Geographic July 1917” Cancel reply 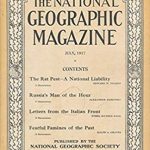