Angola, the Last Foothold of Slavery
In this Portuguese colony on the western coast of Africa, a system of slavery supplies labor for cacao plantations. So brutal is the system, the author says, that those who take their captives out of the country think they have done well if one- half of
Carrying Water Through a Desert: The Story of the Los Angeles Aqueduct
At the northern edge of the Mojave Desert, snowmelt from the Sierra runs into a 75- square- mile alkaline sink called Owens Lake, while some 250 miles to the south are a hundred parched L. A. communities. Under the direction of chief engineer William Mul
Guatemala, the Country of the Future
Continually torn by strife, devastated by earthquakes, and ravaged by disease, the people of Guatemala are in a position to make enormous progress under a peaceful administration with increasing American and German investment.
The Date Gardens of the Jerid
Among all the groves of date palms that lie between Morocco and India, this group of oases southwest of Tunis furnishes the most promising dates for transplantation to U. S. soil.

Be the first to review “National Geographic July 1910” Cancel reply 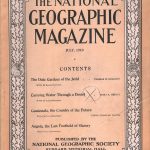