In the 1980s Arctic sea ice extended across nearly three million square miles at the end of summer. Since then more than a third of that ice has been lost.

Wild birds connect us to a nature that’s rapidly receding. They live in a spectacular variety of habitats and signal each one’s ecological health. Birds – with their brilliant plumage, their trills, and their flight – nurture our souls.

A photographer captures the patterns that birds make in the sky.

The Healing of Columbia

After a half century of war.

Moving away from Conflict.

The Science of Good and Evil

Be the first to review “National Geographic January 2018” Cancel reply 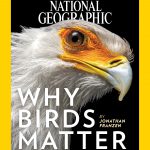