Miami
Immigrants have converted a sleepy, southern city into a vibrant metropolis. But Miami simmers as ethnic groups compete for the American dream.
Africa’s Skeleton Coast
Sustained by desert springs and Atlantic fog, an unlikely group of plants and animals cling to a thin line of survival in Namibia.
U. S. S. [ Macon: ] Lost and Found
In 1935, a 785- foot Navy Dirigible crashed off California. A fisherman’s catch leads sleuths to the Macon’s murky resting- place.
Search for Columbus
What forces shaped Columbus and spurred him to brave treacherous seas to seek the Indies? Old manuscripts hold a key to the mystery of the great mariner.
La Isabela, Foothold in the New World { La Isabela, Europe’s First Foothold in the New World}
Columbus’s first New World town was abandoned after only five years – – doomed by dissension, disease, and famine.
Last Refuge of the Monk Seal
Counting success one animal at a time, wildlife biologists on distant Hawaiian atolls work to save the rare and reclusive monk seal from extinction.

Be the first to review “National Geographic January 1992” Cancel reply 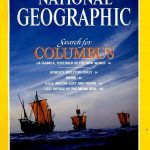