Koko’s Kitten
Using sign language, Koko the gorilla asked for a cat. Jane Vessels and photographer Ronald H. Cohn portray the 230- pound great ape’s gentle reactions to her gift.
Bronze Age Shipwreck
A brief account of the discovery and excavation of a 14th century B. C. shipwreck by underwater archeologist George F. Bass.
The Planets: Between Fire and Ice
From Mercury to Pluto, planetary exploration is adding new knowledge about the origins and possible future of our solar system. Rick Gore profiles our neighbors in space, marveling that life on earth thrives in such a narrow niche between unlivable extr;
The New Face of Baghdad: Iraq at War
In Iraq’s booming capital William S. Ellis and Steve McCurry discover that the nation’s devastating five- year- old war with Iran is out of sight and seemingly out of mind.
Yosemite- -Forever?
Can being loved too much cause insurmountable problems? David S. Boyer and Jonathan Blair present the wonders and woes of Yosemite, the attempts to preserve its beauty while making the park available to all.
Jamaica: Hard Times, High Hopes
Long plagued by economic woes and political upheaval, the island nation is attempting a comeback, attracting much- needed dollars with programs for new exports and a revitalized tourist industry. Charles E. Cobb, Jr. , and David Burnett report.

Be the first to review “National Geographic January 1985” Cancel reply 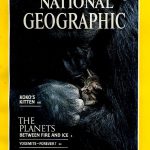