Wildlife of Everglades National Park
Created in 1947, Everglades National Park in southwestern Florida is home to a wide variety of unusual birds and other animals, which find refuge in its mangrove swamps, saw- grass flats, and island hammocks.
With Uncle Sam and John Bull in Germany
Under the terms of the Hague Convention, victors in war cannot let the vanquished starve. For this reason, the United States and Britain are helping former enemies rebuild and recover.
The [ Yankee’ ]s Wander- world
In November 1947, Irving and Electa Johnson set sail from Gloucester, England, aboard the brigantine Yankee. This report marks the halfway point in their voyage to circle the globe.
Shrines of Each Patriot’s Devotion
National shrines to freedom and liberty are scattered across the United States. A cross- country tour, from the best known, such as the Statue of Liberty in New York, to the more obscure, such as Cabrillo National Monument in California, reveals their wo

Be the first to review “National Geographic January 1949” Cancel reply 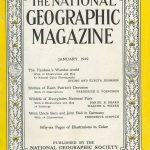