Fun Helped Them Fight
The humorous and sometimes obscure or risque names of aircraft used in World War II served a dual purpose: identification and morale- boosting.
We Survive on a Pacific Atoll
Two Navy sailors assigned to be castaways on a Pacific island, gather information about edible plants and animals, ways of getting water, travel conditions, disease hazards, native lore, and other information that might contribute to the survival of down
Pyramids of the New World
The first Americans constructed not only tombs but also temples and storehouses, and other structures whose precise function is not known.
‘ Round the Horn by Submarine
The U. S. S. Sea Robin was the first U. S. submarine to make a complete voyage around Cape Horn, the southernmost point of South America. Follow the sailors on their trailblazing adventure.
[ Carib] Cruises the West Indies
On February 9, 1947, Carleton Mitchell set sail in his ketch, Carib, fulfilling a lifelong dream: to sail the Caribbean islands. This article tells the story of his voyage among obscure harbors and volcanic islands.
Seal Hunting Off Jan Mayen
The Western Ice off Jan Mayen Island in the Norweigan sea, is the site of an annual hunt for blubber and the white coats of newborns.

Be the first to review “National Geographic January 1948” Cancel reply 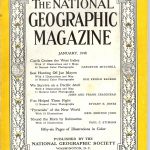