Seafarers of South Celebes
Prior to World War II, the author, G. E. P. Collins, lived and sailed with the seafaring Muslim tribesmen of the Netherlands Indies ( now Indonesia) . In this article, he recalls some of his adventures sailing among the islands of the region.
Our Global Ocean- -Last and Vast Frontier
The onset of World War II helped launch the infant science of oceanography. F. Barrows Colton reviews some of the first discoveries about the ocean’s depths.
Fiji Patrol on Bougainville
A U. S. Marine lieutenant describes the exploits of the Fijian battalion in the Solomon Islands, as they carry on a desperate behind- the- lines struggle against Japanese invaders during World War II.
Paris Delivered
A photographic essay celebrates the entry of Allied troops into a liberated Paris.
Indians of Our North Pacific Coast
The Indian tribes of the Pacific Northwest developed an elaborate and sophisticated culture based on wealth and family position. Matthew W. Stirling examines their various social structures, crafts, and way of life.
I Lived on Formosa
Former diplomat Joseph W. Ballantine recounts his experiences and observations as a Westerner living on Japanese- controlled Formosa ( now Taiwan) before and during World War II.

Be the first to review “National Geographic January 1945” Cancel reply 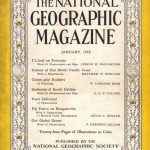