American Bombers Attacking from Australia
A writer shadows a unit of U. S. airmen poised for action on their Australian base and joins them as they bomb a Japanese- occupied base in Lae, New Guinea.
Eastward from Gibraltar: Overland Route Across North Africa to Tunisia and Libia
Busy marketplaces, mules, mosques, palaces, and a railroad characterize the North African towns and cities of Morocco, Algeria, Tunisia, and Libia ( Libya) .
Your Dog Joins Up
The U. S. Army, Coast Guard, and Red Cross train dogs to stand guard, search for wounded soldiers, follow tracks, deliver messages, and attack enemies.
War Finds Its Way to Gilbert Islands: United States Forces Dislodge Japanese from Enchanted Atolls Which Loom Now as Stepping Stones along South Sea Route from Australia to Hawaii
Amid battles between the United States and Japan, the people of the Gilbert Islands, 16 populous atolls of only 166 square miles, hunt sharks, study the stars, and compose poetic songs.
Glass Goes to Town
There are some 30, 000 different compositions of glass that can be used in products, ranging from thermometers to furniture. Since the war consumes a great deal of metal, manufacturers sometimes use glass in its place.

Be the first to review “National Geographic January 1943” Cancel reply 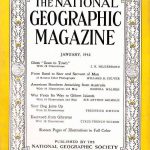