Java Assignment
The people of Java, part of the 3, 600- mile archipelago of Indonesia, are preparing to protect their island from possible Japanese takeover.
Anticosti Island, Nugget of the North
Located at the mouth of the St. Lawrence River, privately owned Anticosti Island is a protected fish and game preserve.
Santa Catalina- -400 Years a Lure to California Travelers
These color photographs of Santa Catalina, an island off the coast of southern California, reveal its Spanish influence.
San Diego Can’t Believe It
Abruptly transformed by war, San Diego’s skies are abuzz with fighter planes speeding to and from the city’s naval base as workers crowd its factories, building more aircraft.
Westward Bound in the [ Yankee]
Braving Pacific waters in a 92- foot schooner built in 1897, a crew explores remote Easter Island, Pitcairn Island, and the Galapagos archipelago.

Be the first to review “National Geographic January 1942” Cancel reply 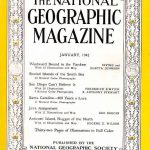