Uganda, Land of Something New : Equatorial African Area Reveals Snow- crowned Peaks, Crater Lakes, Jungle- story Beasts, Human Giants, and Forest Pygmies
Uganda’s people are primarily farmers who live amid volcanoes, deep lakes, rhinos, giraffes, elephants, and bamboo forests on the north shore of Lake Victoria.
Bedouin Life in Bible Lands: The Nomads of the Houses of Hair Offer Unstinted Hospitality to an American
Roaming the barren deserts of Jordan on camels and setting up camps of black tents, Bedouin herd sheep, conduct trade, weave clothing, and mark life’s events with feasts.
As London Toils and Spins
From its crowded docks on the Thames River to the grand Bank of England, it is clear that London’s wealth stems from its role as the world’s busiest river port.
Field Dogs in Action
Dogs such as pointers, setters, spaniels and retrievers have long been invaluable to the sport of hunting.

Be the first to review “National Geographic January 1937” Cancel reply 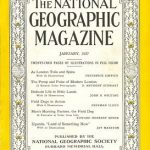