Our Big Trees Saved
To save a 3, 000- year- old stand of giant trees, the National Geographic Society contributes $ 20, 000 to purchase private lands in Sequoia National Park.
A Game Country Without Rival in America: The Proposed Mount McKinley National Park
The Mount McKinley region offers a last chance for the people of the United States to preserve, untouched by civilization, a great primeval park in its natural beauty.
The Valley of Ten Thousand Smokes: National Geographic Society Explorations in the Katmai District of Alaska
When Mount Katmai erupted in 1912 – – one of the most tremendous volcanic explosions ever recorded – – its effects were felt as far as 900 miles away. Expeditions in 1915 and 1916 reveal the destruction and remarkable rejuvenation of this sparsely settle
One Hundred British Seaports
Germany’s plan to blockade Britain’s ports is a proposal bound to fail, since the nation’s sinuous shoreline is better suited to defense against blockade than any other of equal length in the world.

Be the first to review “National Geographic January 1917” Cancel reply 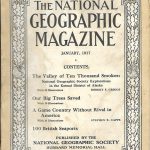