Dumboy, the National Dish of Liberia
From the edible roots of cassava – – mashed and made into a soupy, sticky substance – – comes dumboy, a dish widely enjoyed in Liberia.
Wild Man and Wild Beast in Africa
In a speech to the National Geographic Society, former President Theodore Roosevelt recounts his adventures hunting wild game and studying tribal people in Africa.
Notes on Oman
Located on the Arabian Peninsula, the region of Oman remains largely unexplored by the Western traveler. A brief report describes this exotic and captivating land.
Surveys in the Philippines
The U. S. Coast and Geodetic Survey continues a hydrographic and topographic survey of the Philippines, making great contributions to cartography.
The Population of the United States
The Bureau of the Census announces, among other demographic statistics, that the continental United States had nearly 92 million inhabitants in 1910.
The Roosevelt African Trophies
President Roosevelt gathered many souvenirs from his African safaris.
Women of All Nations
An abstract is presented from the two- volume work Women of All Nations – – Their Characteristics, Habits, Manners, Customs, and Influence.
Damascus, the Pearl of the Desert
With its resplendent mosques and shrines, ancient Damascus beckons the lover of Eastern architecture and culture. Given its strategic geographic position in the East as a key trading center, a prosperous future is certain.
Protecting Our Forests from Fire
Drought in the West sparked a number of unfortunate forest fires from the Columbia River to western Montana and Wyoming. Lack of trails, fire lines, lookout stations, and equipment can be blamed for failures in prevention.

Be the first to review “National Geographic January 1911” Cancel reply 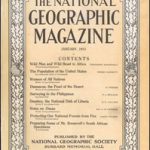