Hazaras: Afghanistan’s Outsiders { Outsiders in Afghanistan; Hazaras; The Outsiders: Hazara People}
The Hazaras cherish education and hard work, but their Shiite Muslim faith and Asian features have long made them a target. Will they find a better life in the post- Taliban era? BY PHIL ZABRISKIE PHOTOGRAPHS BY STEVE McCURRY
Drying of the West
The region’s burgeoning population and intensifying droughts mean there may not be enough water to go around. BY ROBERT KUNZIG PHOTOGRAPHS BY VINCENT LAFORET
The Black Pharaohs: Conquerors of Ancient Egypt { Black Pharaohs}
For 75 years Nubian kings ruled over ancient Egypt, reunifying the country and building an empire. Until recently, theirs was a chapter of history lost in the shadows. BY ROBERT DRAPER PHOTOGRAPHS BY KENNETH GARRETT
Basho’s Trail { Japan’s Haiku Master; On the Poet’s Trail; On the Trail of a Ghost}
Travels along the path of Matsuo Basho, Japan’s 17th- century haiku master, help bring his words to life. BY HOWARD NORMAN PHOTOGRAPHS BY MICHAEL YAMASHITA
Philippine Eagle { Lord of the Forest}
Runaway logging threatens to wipe out one of the world’s largest raptors. Now people are waking up to its plight. BY MEL WHITE PHOTOGRAPHS BY KLAUS NIGGE
Mexico’s Other Border
Central American immigrants heading north face many hazards- and many crossings- in their risky trek to the land of marvels. BY CYNTHIA GORNEY PHOTOGRAPHS BY ALEX WEBB

Be the first to review “National Geographic February 2008” Cancel reply 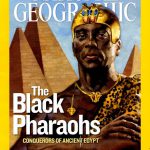