2, 000 Miles Through Europe’s Oldest Kingdom
Although the scars of war remain almost four years after the end of World War II, the Danes have regained their noted good humor and economic prosperity.
Sea Fever
An 18- year- old adventurer sets out on a 14- month solo journey from Ecuador to Florida. His equipment consists only of a 50- pound pack, a shotgun, a compass, and the clothes on his back. From Quito to Miami, he walks and paddles or sails a dugout cano
Oasis- hopping in the Sahara
Setting out from Algiers in a bus, Maynard Owen Williams and his wife spend 12 days visiting a string of oases in the North African Sahara. Although the desert’s inhabitants still wear traditional robes and ride camels, automobiles now intrude even on t
Biggest Worm Farm Caters to Platypuses
In the cellar of the lion house, New York’s Bronx Zoo operates the biggest earthworm- breeding farm in the world. This farm was started to satisfy the dietary needs of two duckbilled platypuses, who consume about two pounds of worms a day.
History Repeats in Old Natchez
Natchez, Mississippi, experiences a renaissance as oil replaces cotton, and a new industry makes the economy boom. The grand mansions of this Dixie city enjoy a face- lift and general refurbishing as tourists revisit the Old South.

Be the first to review “National Geographic February 1949” Cancel reply 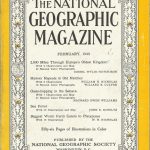