Indians of the Far West
American Indians living between the Rocky Mountains and the Pacific coast, endured harsh conditions, but many were fine basket weavers and wood workers.
Our Air Age Speeds Ahead
Fighter planes, helicopters, cargo planes, and passenger carriers all have roles to play as air travel booms in the postwar world.
Rubber- cushioned Liberia
Rubber plantations, owned and operated by the Firestone company, are the economic foundation of Liberia. Founded by the descendants of former slaves, this country combines present Africa with American roots.
Haunting Heart of the Everglades
On December 6, 1947, President Harry S. Truman dedicated the Everglades National Park in Florida. This unique ecosystem is explored to learn more about the plants, animals, and people who call this river of grass home.
Shawneetown Forsakes the Ohio
Repeated floods forced most residents and businesses from the original settlement, or Old Town, to the higher and safer elevation of New Town.
First American Ascent of Mount St. Elias
The Harvard Mountaineering Club- Mount St. Elias Expedition, achieved its goal of being the first American team to reach the summit of the fourth- highest peak in North America.

Be the first to review “National Geographic February 1948” Cancel reply 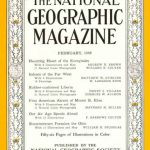