Hunting Folk Songs in the Hebrides
Margaret Shaw Campbell spent nearly six years living on South Uist in Scotland’s Outer Hebrides, collecting and recording folk songs in their original Gaelic.
Scintillating Siam
W. Robert Moore returns to Thailand after 15 years, to report on a country emerging from the political and economic chaos and isolation caused by Japanese occupation and totalitarian rule.
Carefree People of the Cameroons
A photo essay shows the people of the Kapsiki and other tribes who live in tropical Africa.
On the Trail of La Venta Man
Matthew W. Stirling leads an expedition to the southern Mexican state of Chiapas, where his team learns more about the lives and culture of the preclassic inhabitants of La Venta Gorge.
Blizzard of Birds: The Tortugas Terns
The sooty and noddy terns make their home in the Dry Tortugas in the Gulf of Mexico.
Pageantry of the Siamese Stage
D. Sonakul describes the complex plot and glittering pageantry of the Ramakien, the Thai version of the 22- century- old Indian epic Ramayana.

Be the first to review “National Geographic February 1947” Cancel reply 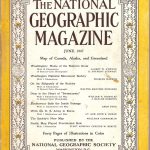