Wildlife of Tabasco and Veracruz
In the spring of 1943, a joint expedition sponsored by the National Geographic Society and the Smithsonian Institution explored the jungles of Mexico. The expedition cataloged over 143 species of birds, in addition to lizards, tapirs, and other wildlife;
Bornholm- -Denmark in a Nutshell
The small island of Bornholm was a miniature version of everything Scandinavian. Then came World War II and occupation by the German army. Mason Sutherland recounts life in this Danish enclave before the war.
Today on the China Coast
John B. Powell, an old China hand, describes the war- torn coast of China and his own imprisionment during the Japanese occupation.
Gilbert Islands in the Wake of Battle
The Gilbert Islands of the Pacific were the scene of many bloody World War II battles. W. Robert Moore visits this group of islands to see how they have begun to recover.
The Yield of Texas
Riding the economic boom generated by World War II, Texas continues to be the United States’ largest supplier of oil and natural gas products. Beef, rubber, cotton, helium and rice are only some of the products described by Frederick Simpich.
Insignia and Decorations of the United States Armed Forces
The National Geographic Society completes its revision of the publication Insignia and Decorations of the United States Armed Forces. This publication was updated to include over 2, 000 insignia, recording official additions and changes through December

Be the first to review “National Geographic February 1945” Cancel reply 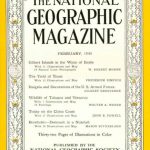