Bohemia and the Czechs
The liberation of the Czechs and Slovaks from Austria- Hungary is one of the conditions of peace in Europe. Fifteen hundred years of struggle have failed to break the spirit of these peoples.
Prizes for the Inventor: Some of the Problems Awaiting Solution
Noting that in his youth schools graduated scholars rather than scientists, Alexander Graham Bell predicts a distinguished future for scientific men and technical experts.
Our Foreign- Born Citizens
Our polyglot population is surveyed, with charts showing where immigrants have settled in America. When the war is over, will hordes of people fleeing misery at home again flock to America?
Little Citizens of the World
Of special interest for the boys and girls of our members, this photographic portfolio of children from around the world celebrates the universal innocence of youth.

Be the first to review “National Geographic February 1917” Cancel reply 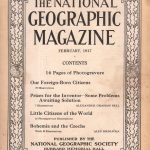