A Traveler’s Notes on Java
A journey to the most densely populated of the Dutch East Indies ( Indonesia) – – an equatorial island the size of New York State with world- class architectural remains and deep, rich soil that surpasses that of any other comparable area.
The International Millionth Map of the World
The first standard international atlas, proposed in 1891, will be drawn at a scale of one to one million throughout and employ local spellings using the Latin alphabet.
The Great Natural Bridges of Utah
Even the deservedly famous Natural Bridge in Virginia pales in comparison to the half- dozen wondrous formations among the sandstone beds of southeast Utah.
An Ancient Capital
Excavations begun in 1906 in Asia Minor are revealing much about the Hittite civilization that overthrew the first Babylonian dynasty 4, 000 years ago.
The South Polar Expedition
Commander Peary proposes to the National Geographic Society an expedition that would leave in August, cross the Antarctic Circle by January 1, 1911, and reach the South Pole from a base in the vicinity of Coats Land.
The Great Ice Barrier
Discovered in 1840, it has been understood only recently that this frozen formation is the southern limit of a great sheet of ice. The author proposes that the sheet be named Shackleton Glacier, in honor of the man who explored it most extensively.
Wilkes’ and D’ Urville’s Discoveries in Wilkes Land
A study of the ships’ logs shows that the first person to discover Antarctica was a United States naval lieutenant who sighted Cape Hudson a day before French captain M. J. Dumont d’ Urville found Adelie Land.
The Barrage of the Nile
Between Gondokoro and Khartoum an aquatic plant called sudd obstructs the Nile. To clear the route, the Egyptian government has dispatched a fleet of steamers and barges to remove the dense growth.
The Land of the Crossbow
Previously unexplored by the Chinese, the Salwin Valley is home to the isolated Lissoo people, who hardly ever stray from their own villages.

Be the first to review “National Geographic February 1910” Cancel reply 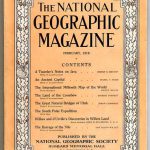