Isles of the Pacific { The Pathfinders}
Two thousand years of Pacific seafaring spring to life in the paintings of Hawaiian artist Herb Kawainui Kane.
Isles of the Pacific { The Coming of the Polynesians}
Recent research, says anthropologist Kenneth P. Emory, finally allows us to reconstruct one of the great explorations of all time – – the discovery of the Pacific Islands.
China Unveils Her Newest Treasures
A shroud of jade and a flying horse highlight the trove of Asian art now touring the Western World.
Life in the Enduring Pyrenees { The Enduring Pyrenees}
Robert Laxalt, himself of Basque descent, and photographer Edwin Stuart Grosvenor travel through the sequestered mountain domain of the French- Spanish border.
Isles of the Pacific { Problems in Paradise}
Even the idyllic South Seas face growing environmental hazards, as conservationists Mary and Laurance Rockefeller learn.
The Columbia River, Powerhouse of the Northwest { Powerhouse of the Northwest; Hopes and Worries Along the Columbia River, Powerhouse of the Northwest}
Writer- photographer David S. Boyer traces the river that, more than any other in North America, has been tamed to work for man.
Isles of the Pacific { Wind, Wave, Star, and Bird}
Putting away his compass and charts, veteran voyager David Lewis rediscovers the lost arts of the Polynesian navigators.
Caribou: Hardy Nomads of the North
Jim Rearden tells of Alaska’s still immense herds of barren ground caribou – – the buffalo of the last U. S. frontier.

Be the first to review “National Geographic December 1974” Cancel reply 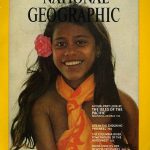