My Life in the Valley of the Moon
Visit the Sonoma Valley, a part of California made famous by Jack London. This picturesque valley was settled by the Spanish and Russians, and is now a prime wine- growing region.
Masterpieces on Tour
Some of the greatest masterpieces of European painting survived the destruction of World War II. A traveling exhibition of 202 pictures will tour museums in the United States.
Lascaux Cave, Cradle of World Art
The caves of Lascaux, in the hills near Dordogne, France, contain some of the finest examples of prehistoric painting ever found.
The Curlew’s Secret
The exact nesting grounds of the bristle- thighed curlew remained a secret until an expedition discovered the bird’s hideout in a lonely stretch of Alaska tundra.
Sinai Sheds New Light on the Bible
The Greek Orthodox monastery of St. Catherine’s stands at the base of Mount Sinai in the Sinai desert. Using this as their base of operations, a team of archeologists and anthropologists search the desert for clues about the peoples known to us only thr

Be the first to review “National Geographic December 1948” Cancel reply 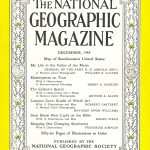