Arab Land Beyond the Jordan
A photo essay shows the landscape and people of the Arab Legion in Trans- Jordan ( Jordan) .
An Archeologist Looks at Palestine
The author encounters history at every turn, in an ancient land that has been a cockpit of unending conflict for many centuries.
Erosion, Trojan Horse of Greece
Hoping to reverse the effects of soil erosion and improve agricultural practices, the Greek government requested the help of American agricultural scientists. The problems of poverty, disease, and malnutrition can be traced to the ills of Greek agricultu
Louisiana Trades with the World
There is more to Louisiana than just Mardi Gras and swamps. Agriculture, trade, and oil play their part too.
Keeping House in London
More than a year after the end of the World War II, residents of London still cope with housing shortages, food and clothing rationing, and standing in line. Frances James recounts with humor the daily struggle to create a normal life amid chaos.
Carnival in San Antonio
Since its foundation as a Spanish colonial outpost, San Antonio, Texas, has been the Southwest’s carnival capital. The colorful blend of Spanish, Indian, and Western traditions makes for an intriguing city.

Be the first to review “National Geographic December 1947” Cancel reply 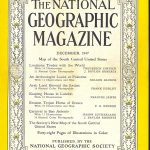