A Tale of Three Cities
Budapest, Vienna, and Prague, three historic cities of Europe’s Danube Basin, all suffered greatly during World War II. Thomas R. Henry reports on how each city has emerged from the wreckage.
New Guinea’s Mountain and Swampland Dwellers
Ray T. Elsmore visits the little known people of Papua New Guinea’s Grand Valley to discover that most of their way of life, including occasional headhunting, remains intact.
The Saguaro, Cactus Camel of Arizona
The giant saguaro cactus is the most characteristic form of plant life in the Arizona desert. Forrest Shreve describes the many varieties of this unique plant.
Science Works for Mankind
A series of color illustrations depicts the technological advances of the postwar era, including x- ray machines, television studios, and electron microscopes.
Winning the War of Supply
For the United States to successfully fight a two- front war required the construction of the longest supply line in history. F. Barrows Colton describes how the military accomplished such a feat.
Face of Japan
The loss of most of its dependent islands and territories in World War II has reduced Japan to a country of four main islands and a few smaller ones. A new color map of Japan accompanies the article which explores the losses Japan suffered as a consequen

Be the first to review “National Geographic December 1945” Cancel reply 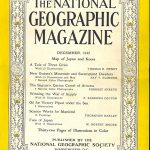