Canaries and Other Cage- Bird Friends
More than 35 varieties of canaries and finches are described here.
Change Comes to Bible Lands
The countries of the Near East are shifting from the customs of the past to the technology of the future; unfortunately, some countries are being transformed by strife.
Marvels of Metamorphosis: A Scientific G- man Pursues Rare Trapdoor Spider Parasites for Three Years With a Spade and a Candid Camera
Armed with a powerful photgraphic microscope, a scientist studies the parasites that afflict the trapdoor spider of southern California.
The Garden Isles of Scilly: Geologists May Throw Stones at Legend of Lost Lyonnesse, But Natives Grow Flowers in Glass Houses for London
Battered by rough seas yet abundant with flowers, the Scilly Isles off the coast of England were according to legend, part of Lyonnesse, a land bridge to Cornwall that was buried by the sea after King Arthur’s death.

Be the first to review “National Geographic December 1938” Cancel reply 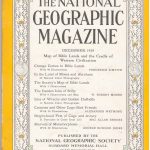