An Ideal Fuel Manufactured Out of Waste Products: The American Coal Briquetting Industry
An estimated 200 million tons of anthracite was lost last year in the United States. If that slack was pressed into briquettes, a procedure followed in Germany and France, the U. S. would be rewarded with hotter fires, quicker ignition, and less smoke th
An Interesting Visit to the Ancient Pyramids of San Juan Teotihuacan
The largest prehistoric structure in the Americas – – the Pyramid of the Sun – – and the Pyramid of the Moon, likely of Toltec origin, are filled with idols and artifacts.
Hewers of Stone
The ruins of Mitla, with their extensive mosaic fretwork, are among the most beautiful, interesting, and best preserved in Mexico.
Race Prejudice in the Far East
If the United States is to retain influence in Asia, argues the general manager of the Associated Press, Americans and Europeans must recognize that racism toward the people who live there can give rise to potentially dangerous levels of resentment.
Some Mexican Transportation Scenes
In addition to more modern methods, the burro, ox cart, and water carrier are some of the means of transport in Mexico.
A North Holland Cheese Market
The most extensive cheese trade in North Holland occurs on Fridays from 10 to 11 a. m. on a stone- paved square in the town of Alkmaar. In the course of one hour about 100, 000 cheeses are sold.
The Isthmus of Tehuantepec: The Bridge of the World’s Commerce
The article examines the lives and history of the people who live near the new railroad in southern Mexico.
Agricultural Possibilities in Tropical Mexico
Every country needs tropical dependencies, the author says, to keep itself supplied with coffee, tea, sugar, spices, and more. Even if developed to full capacity the Philippines, Cuba, Puerto Rico, and Hawaii would not suffice to meet U. S. needs. The so

Be the first to review “National Geographic December 1910” Cancel reply 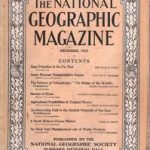