The gannet can plunge into the sea at 70 miles an hour and go as deep as 50 feet.

The “other London” gets ready for its role as a venue for the Summer Olympics.

Tim Samaras zips along with his 1,600-pound camera, aiming to snap the birth of a bolt.

Be the first to review “National Geographic August 2012” Cancel reply 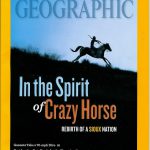