Our Electric Future { A Comeback for Nuclear Power? Our Electric Future}
As demand rises for more electricity – – and for more nuclear safeguards – – the nuclear industry unveils designs for reactors said to be safer and more economical.
In the Eye of Desert Storm
A first- hand account of an Operation Desert Storm battle.
Cuba at a Crossroads
A last bastion of Marxism- Leninism, Cuba skirts economic collapse, but Caribbean rhythms of life continue to pulse on this island of tropical beauty.
National Park Service at 75 { The National Park Service Turns 75; The Best Idea America Ever Had }
The U. S. National Park Service – – 75 years old this month – – guards 357 significant sites. Dedicated men and women tend threatened wildlife and injured hikers, spot poachers, and reclaim forest, while facing an unending tidal wave of visitors.
L’ Enfant’s Washington
Two hundred years ago a French architect envisioned a gracious new capital for the infant United States. His plan left an indelible imprint on Washington, D. C.
The Persian Gulf: After the Storm { After the Storm}
Spilled oil sullies the Persian Gulf and shrouds of smoke from blazing wells turn day to night in the aftermath of the gulf war. Cleanup has begun, but battle scars will mark the environment for decades.

Be the first to review “August 1991” Cancel reply 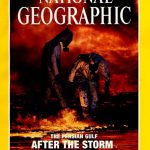