Utah’s Arches of Stone
The peaceful community of Moab, Utah, is at the heart of some of America’s most breathtaking natural scenery. The area’s arches and canyons are spectacular examples of erosion at work.
Desert River Through Navajo Land
The San Juan River flows through the Navajo lands in Utah and Arizona. The 200- mile journey down the swift river winds through some of America’s most magnificent landscapes.
Scenes of Postwar Finland
Life in Finland can be cold and sometimes poor, but visits to Lapland and other places in the far north reveal that the Finnish spirit remains undimmed in the aftermath of war.
Men, Moose, and Mink of Northwest Angle
Northwest Angle, Minnesota, through an accident of geography, is cut off from the rest of the U. S. Explore this enclave, attached to Manitoba Province, Canada, and the lives of its hardy inhabitants.
Land of the Pilgrims’ Pride
From 1620 to 1692, Plymouth Colony was an independent Pilgrim republic, stretching from Cape Cod to what is now lower Maine. Many traces of the original inhabitants live on in modern Plymouth, Massachusetts.
Hummingbirds in Action
Much of what we know about ruby- throated hummingbirds is due to the patient work of Mr. and Mrs. Laurence J. Webster of Holderness, New Hampshire. The family’s experiences with hummingbirds over nearly 20 years tells us much about these fast flappers.

Be the first to review “National Geographic August 1947” Cancel reply 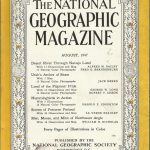