Low Countries Await Liberation
These photographs capture scenes from Belgium and the Netherlands, attacked by Germany in May 1940.
Gliders- -Silent Weapons of the Sky
Governed by thermals, gliders are a powerful, silent weapon being used in war for the first time. Germany used gliders in war in 1940, and the United States began using gliders three years later to land troops and deliver supplies.
The Aerial Invasion of Burma
The commanding general of the U. S. Army Air Forces describes the U. S. surprise attack of Japanese troops in Burma, which involved gliders and other aircraft.
Palms and Planes in the New Hebrides
American marines discover the heat, mud, hot springs, and mosquitoes of the jungle- covered South Pacific island of Efate, of the New Hebrides, an island group that stretches for 550 miles between New Caledonia and the Solomon Islands.
A Land of Lakes and Volcanoes
Nicaragua, the largest republic of Central America, is dotted with rain forests, volcanoes, mountains, freshwater lakes, rubber and mahogany trees, and adequate catch for fishermen.
Women at Work
Because of the war, women now comprise one- third of the work force, working in shipyards, factories, laboratories, railroads, and the Army.

Be the first to review “National Geographic August 1944” Cancel reply 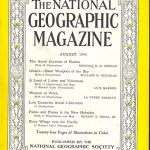