We Live Alone, and Like It- -On an Island
As the only inhabitants of sea- beaten Skokholm, a 250- acre island off the coast of Wales, the Lockley family lives among seals, rabbits, and thousands of migrating birds.
Our Search for the Lost Aviators: An Arctic Area Larger Than Montana First Explored in Hunt for Missing Russians
Searching for six Russians who disappeared in August 1937 during an attempt to fly across the North Pole from Moscow to Fairbanks, Alaska, a team of rescuers sifts through a previously unexplored Arctic region.
Birds of the High Seas: Albatrosses and Petrels; Gannets, Man- o’ -war- birds, and Tropic- birds
Myriad species of birds, varying in size and color, soar above oceans from the Arctic to the South Pole.
Czechoslovaks, Yankees of Europe
The Czech slogan, Hold out; Yield to Nobody exemplifies the noble spirit of the densely populated, democratic nation of Czechoslovakia.

Be the first to review “National Geographic August 1938” Cancel reply 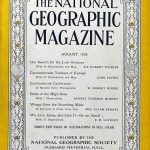