Hunting Birds With a Camera: A Record of Twenty Years of Adventure in Obtaining Photographs of Feathered Wild Life in America
In a project documenting the habits and habitats of America’s birds, a photographer sets out to capture with a camera what Audubon had shown with a paintbrush.
Ruins of Cuicuilco May Revolutionize Our History of Ancient America: Lofty Mound Sealed and Preserved by Great Lava Flow for Perhaps Seventy Centuries Is Now Being Excavated in Mexico
In a valley southeast of Mexico City, volcanic lava has preserved artifacts and what may be temples built to gods as long ago as 5, 000 B. C.
Our Heritage of the Fresh Waters: Biographies of the Most Widely Distributed of the Important Food and Game Fishes of the United States
Overfishing and pollution that has reached appalling proportions are diminishing the nation’s supply of freshwater fish. Seventeen major species of threatened fish are illustrated in color.

Be the first to review “National Geographic August 1923” Cancel reply 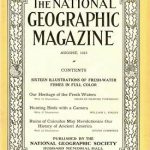