Cranes: The Long Way Home { Cranes: No Mere Bird }
Cranes Symbols of luck and majesty, cranes have been called wildness incarnate. But with wildness disappearing and their luck running out, the great birds are getting some help from scientists and self- described craniacs. BY JENNIFER ACKERMAN MAP SU
Africa’s City of Hope and Fear { Johannesburg; City of Hope, City of Fear: Johannesburg}
Johannesburg Ten years after apartheid, South Africa’s boom- town wrestles with new freedoms and new fears. Will Jo’ burg over- come its crimes- past and present- to lead Africa into the future? BY PETER GODWIN PHOTOGRAPHS BY TOMASZ TOMASZEWSKI
Hukawng Valley { Tigers in the Valley of Death ; Valley of Death; A Question of Balance}
Valley of Death In Myanmar’s isolated Hukawng Valley the tiger was king of the jungle until poachers and gold miners moved in. Now plans are under way to restore its reign with the largest tiger sanctuary in the world. BY ALAN RABINOWITZ PHOTOGRAPHS BY
04578: Worm Capital of the World { Worm Capital of the World; ZipUSA: 04578; ZipUSA: Wiscasset, Maine}
ZipUSA: 04578 The prettiest village in Maine has great lobster rolls, but Wiscasset’s real specialty is foot- long worms. BY CATHY NEWMAN PHOTOGRAPHS BY JOSE AZEL
Badlands { It’s All Good in the Badlands; Reefs in a Prairie Sea}
Badlands South Dakota’s stark buttes and wind- roiled grasslands are more bountiful than bad, harboring bison, birds, and a hoard of fossils that illegal collectors can’t resist. BY JOHN L. ELIOT PHOTOGRAPHS BY ANNIE GRIFFITHS BELT
Chasing Tornadoes: A Tale of Science, Guts, and Luck { The Hard Science, Dumb Luck, and Cowboy Nerve of Chasing Tornadoes}
Chasing Tornadoes Stalking the funnel clouds that rip through America’s heartland, a National Geographic team gets in close for a terrifying look at the workings of the deadly storms. BY PRIIT ] . VESILIND PHOTOGRAPHS BY CARSTEN PETER

Be the first to review “National Geographic April 2004” Cancel reply 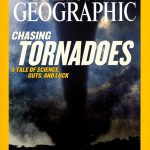