In Search of Arabia’s Past
The Province of Hasa in Saudi Arabia holds not only holds oil underneath the sand, but also conceals many relics of an ancient civilization.
Founders of Virginia
A biographical sketch of the sponsors of the Virginia Company, the adventurers who championed settlement of the new colony.
The Idyllic Vale of Kashmir
The Kashmiri way of life has remained basically unchanged for centuries, no matter which government is in charge.
Around the Great Lakes of the South
The great lakes of the south were created when the Tennessee Valley Authority built a series of dams along the Tennessee River. The dams control flooding and soil erosion, and have added 15, 000 miles of navigable inland and coastal waterways.
Down Mark Twain’s River on a Raft
During the summer of 1946, two father- son pairs build a raft and sail down the Mississippi, discovering that life on the grand river certainly has changed since Tom and Huck set afloat.

Be the first to review “National Geographic April 1948” Cancel reply 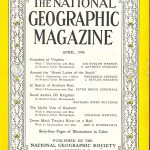