South from Saipan
The recapture of Saipan, part of the Mariana Islands in the Pacific,
Photoflashing Western Owls
The habits of western owls, including great horned owls, long- eared owls, elf owls, and screech owls, were observed by the author over three weeks. Photographing owls at night requires a great deal of ingenuity and patience, as Lewis W. Walker also disc
Paris Freed
Liberated Paris still suffers many shortages, as Frederick Simpich visits the city on a 48- hour pass. There is, however, no shortage of good humor as Parisians struggle to return their city and way of life to normal.
England’s Historic and Scenic Treasures { The Preservation of England’s Historic and Scenic Treasures}
The National Trust for Places of Historic Interest or Natural Beauty was founded in 1895. Founded long before there was any thought of a great war, the organization is dedicated to preserving England’s historic buildings, documents, scenic views, and ot
Crimea Reborn
By the summer of 1944, the Crimea in the Soviet Union had sufficiently recovered from the devastation of World War II, for the Soviet government to invite a group of foreign journalists on a tour. Eddy Gilmore reports his observations on how the breadbas

Be the first to review “National Geographic April 1945” Cancel reply 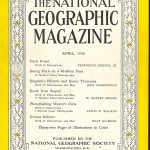