Jungle War: Bougainville and New Caledonia
These 17 official U. S. Navy paintings depict the November 1943 American occupation of the largest of the Solomon Islands, Bougainville, as well as scenes from the U. S. military base on New Caledonia.
Nantucket- -Little Gray Lady
Once a whaling community, Nantucket, an island off the coast of Cape Cod, Massachusetts, is visited by summer tourists who enjoy its old streets, historic homes and beaches.
Alert Anatolia
These photographs focus on the people of Turkey and their cities, such as Istanbul and Ankara.
Toy Dogs, Pets of Kings and Commoners
Classified as miniatures of larger sporting and nonsporting breeds, toy dogs include spaniels, terriers, pugs, and Pekingese.
The Clock Turns Back in Yugoslavia: The Fortified Monastery of Mountain- girt Dec?ani Survives Its Six Hundredth Birthday
An American family travels to the mountains of Nazi- occupied Yugoslavia to visit a monastery built in the 14th century.
Japan and the Pacific
The former United States ambassador to Japan describes Japan’s excellent ports, efficient navy, swift railroads, strong communications, modern cities, the religion of Shintoism, and its emphasis on militarism.

Be the first to review “National Geographic April 1944” Cancel reply 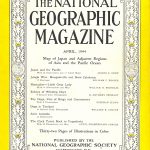