Color Glows in the Guianas, French and Dutch
Side by side, French Guiana and Dutch Guiana ( Suriname) are jungle- covered colonies on the north coast of South America.
The British Commonwealth of Nations: Organized Freedom Around the World
Scattered across seven seas, the British Commonwealth of Nations includes Newfoundland, India, New Zealand, South Africa, and many other countries that contribute to the strength of Britain.
The Long River of New England: In War and Peace, from Mountain Wilderness to the Sea, Flows the Connecticut River, Through a Valley Abounding in History, Scenery, Inventive Genius, and Industry
From the mountains of New Hampshire to Long Island Sound, the Connecticut River courses past capital cities, farms, and colonial sites.
Farmers Keep Them Eating
American farmers are fighting in the fields, helping the war effort by providing potatoes, eggs, corn, and milk to Allied troops.

Be the first to review “National Geographic April 1943” Cancel reply 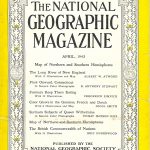