California Says It with Wild Flowers
California blooms with more than 4, 000 species of wild plants, including coreopsis, lupine, and poppies.
The Making of an Anzac
Preparing to fight in the Second World War, the men of the Australia- New Zealand Army Corps, or Anzac, vigorously train in their rugged, beautiful homelands.
Mediterranean Checkerboard
Of the 19 countries that border the Mediterranean Sea, almost every one is involved in the Second World War.
Metal Sinews of Strength: This Is a War of Many Metals, for We Live in an Age of Alloys
Light metals and strong alloys such as aluminum, beryllium, magnesium, and tungsten are crucial to the war effort.
War Meets Peace in Egypt
Though not officially at war, Egypt nonetheless suffers air raid bombings and welcomes Allied troops that try to prevent Axis invasion.

Be the first to review “National Geographic April 1942” Cancel reply 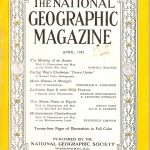